Live updates from the team aboard Pressure Drop during additional dives to the deepest point in the Tonga Trench.

Unfortunately, it appears that the electrical issue I had on my dive to the bottom of the Horizon Deep was a bit more extensive than we first anticipated. It is repairable, but it would require about 48 hours to fix, and by that time we would be out of schedule time to complete the second dive and make our flights back home. We have a schedule to keep in order to get to the Molloy Deep, in the Arctic Ocean, on time, and have to be strict about time management. Additionally, it wasn’t clear if the calm weather would hold while we remained over the dive site.

While we couldn’t dive the sub, we continued to dive the landers at shallower depths to collect biological samples and videos of the Tonga Trench. This has allowed us to get marine data not just at the deepest point of the trench, but also its slopes. This helps the scientific team better understand what the whole systems is like from a biological and geological perspective. The Five Deeps expedition is not just about demonstrating the technical capabilities of the Limiting Factor submersible, support ship, and landers, but actually beginning to scratch the surface towards deeper understanding of these never-before-visited places. 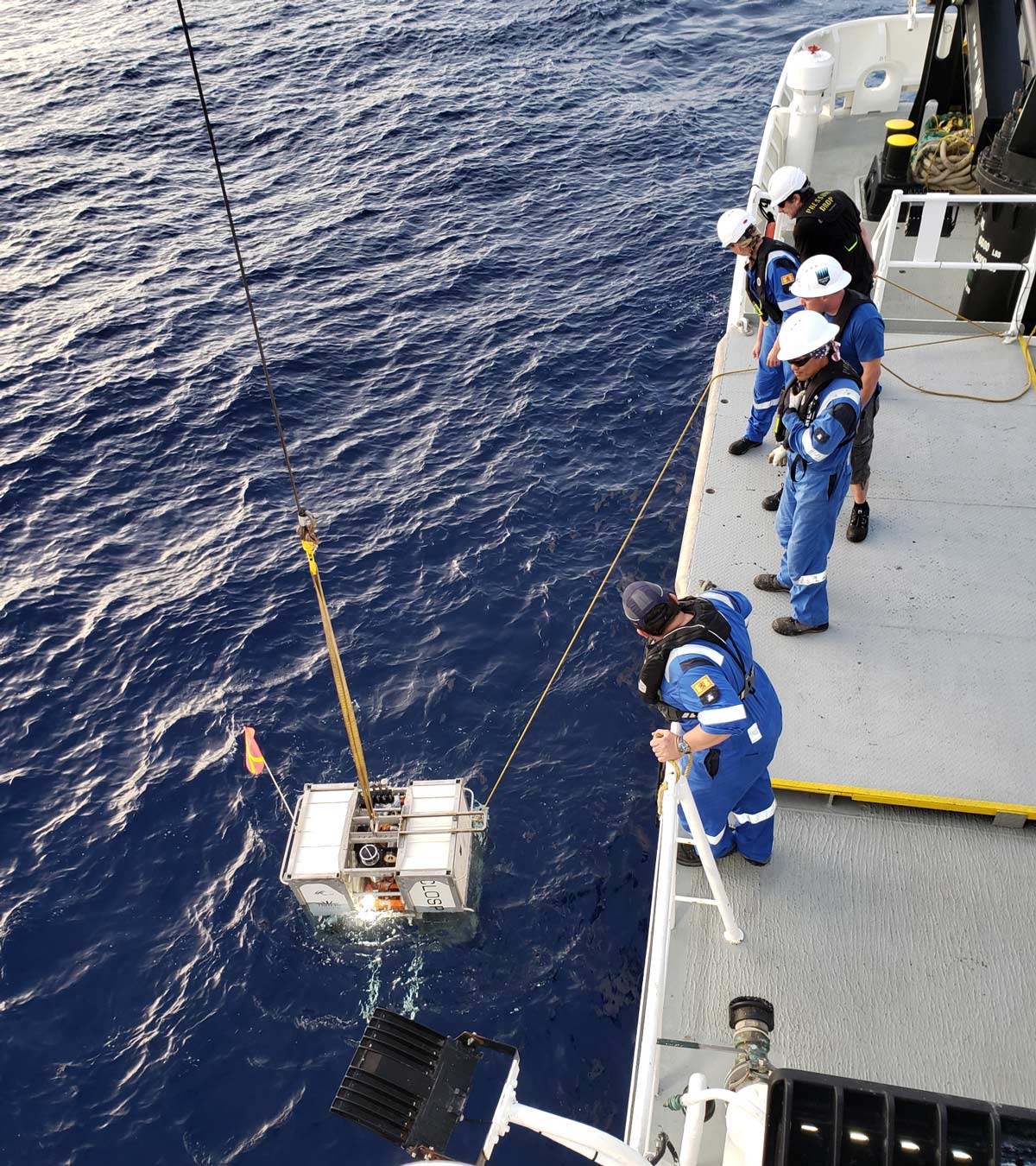 As difficult as the decision was, we instead used the time onboard to really audit the Limiting Factor’s systems after six dives to over 10,000 meters – no submersible had ever done it even twice. Right now, the belief is that a very small amount of water got into a single electrical junction box on the starboard side and caused a short to occur. We’ve subjected all the components on the sub to compression forces amounting to 1,100 atmospheres and back again to 1, six times, and that is a massive amount for any system. There is no testing facility on earth that could test the sub like this. So in a way, we are forced to do research, development, and perfection in the field. Frankly, it is extraordinary that the sub has proven so capable across this many very deep dives. Before this past month, no submarine in history had ever dived like this, and here we had six successful dives in a row. It was noteworthy that on this past dive, we had perfect operation of every other system on the sub including variable ballast, communications, thrusters, hull integrity, life support, everything. I feel no sense of anxiety when I close the hatch, even when going to nearly 11,000 meters.

We are just now pulling back into Tonga harbor with our trusted pilot boat guiding us in. We are all packing up now and will be catching our flights tomorrow back to the States or wherever our plans take us. The ship and sub now make a quite long transit across the Pacific to the Panama Canal and then back to Puerto Rico. Upon reaching San Juan, the ship will literally have sailed around the world for this expedition, and we will pick back up in July to do a major science dive off Puerto Rico. Until then . . . 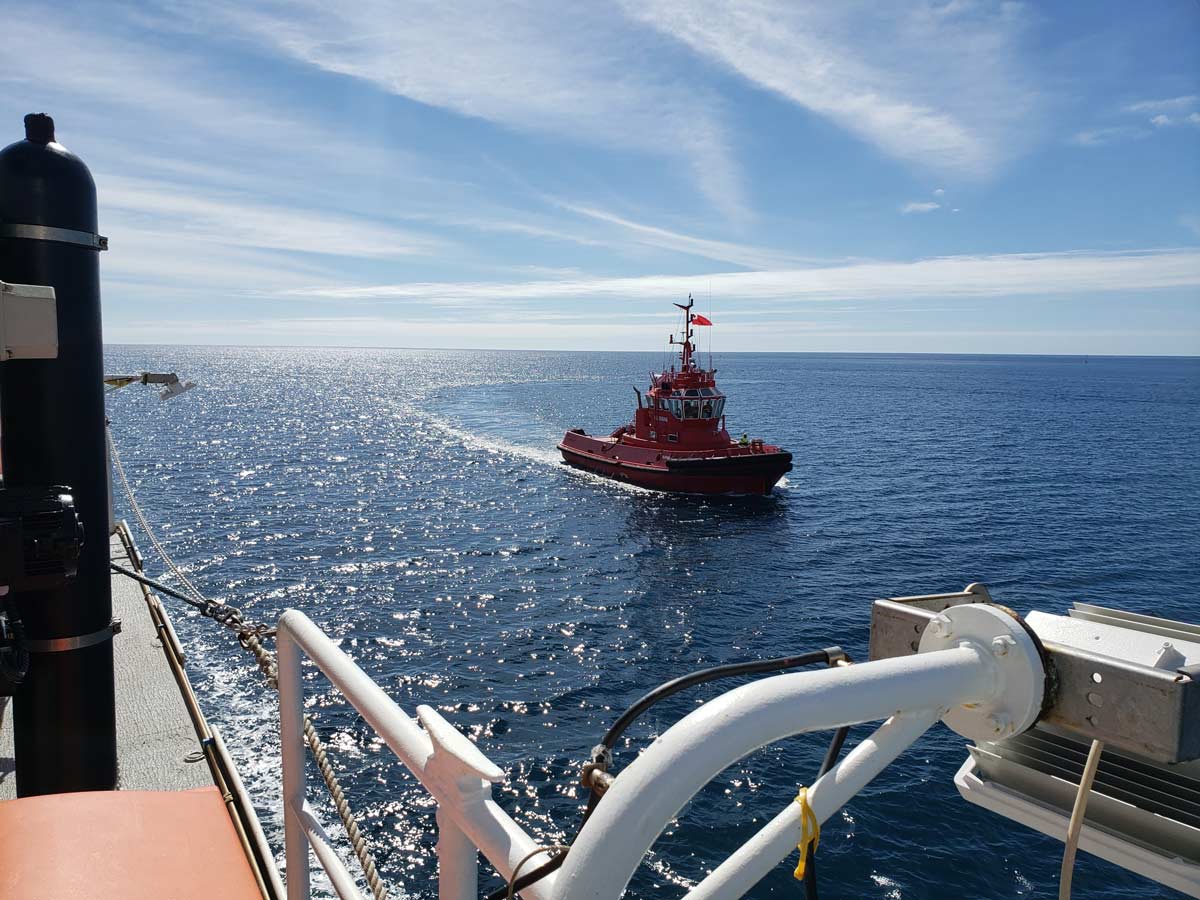 The cruise from Tonga to the survey area last night was just a bit rough, with a couple of the expedition members quaffing more than a few seasickness pills to steady their stomachs. We were on the back end of a storm that passed through the area, but which portended about 48 hours of good weather before another storm is expected to roll in. We took advantage of the moderate seas to get everything ready for the dive and were able to launch the sub in acceptable (sea state 3?) conditions at about 8:45 am. Landers Skaff and Closp went down with me to provide reference points on the bottom. 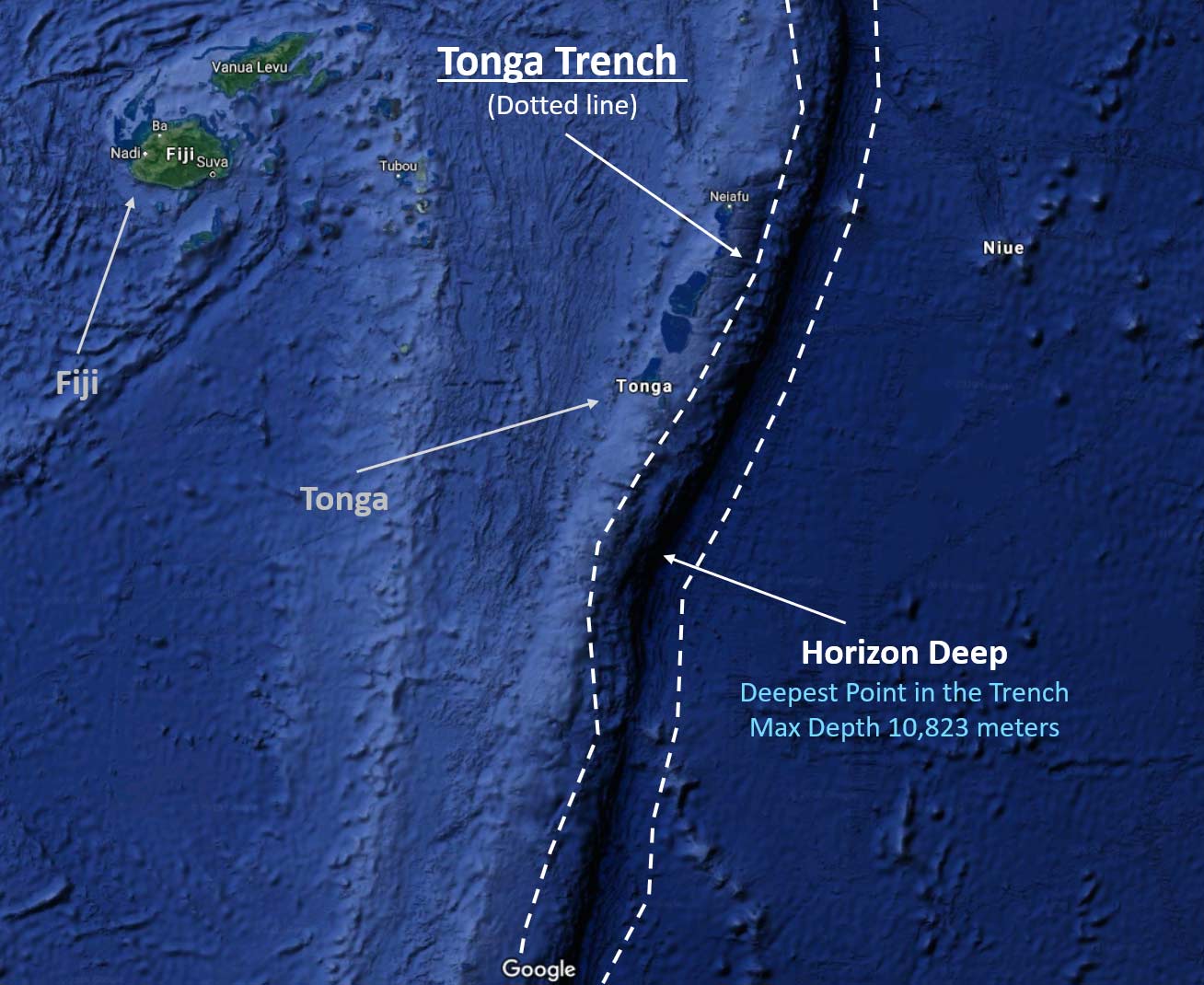 The overall topography of the Horizon Deep is perhaps the most varied and dramatic of all the deeps we have seen so far, with pronounced ridges and slopes far steeper than the other diving sites. After a four-hour descent to the bottom, I arrived in the middle of a very flat, beige-colored sand plain with extremely little detail. I saw no wildlife, no evidence of man – only a flat plain that looked like a vast desert, but completely underwater. Currents caused me to drift almost 400 meters from Skaff on the way down, so I navigated across the featureless bottom for some time before I finally found him. Unfortunately, the intense 16,000 psi of pressure somehow found its way into one of the sub’s electrical junction boxes and caused an electrical short circuit on my way to the lander. That caused me to lose some electrical power and threatened to cut short my dive. 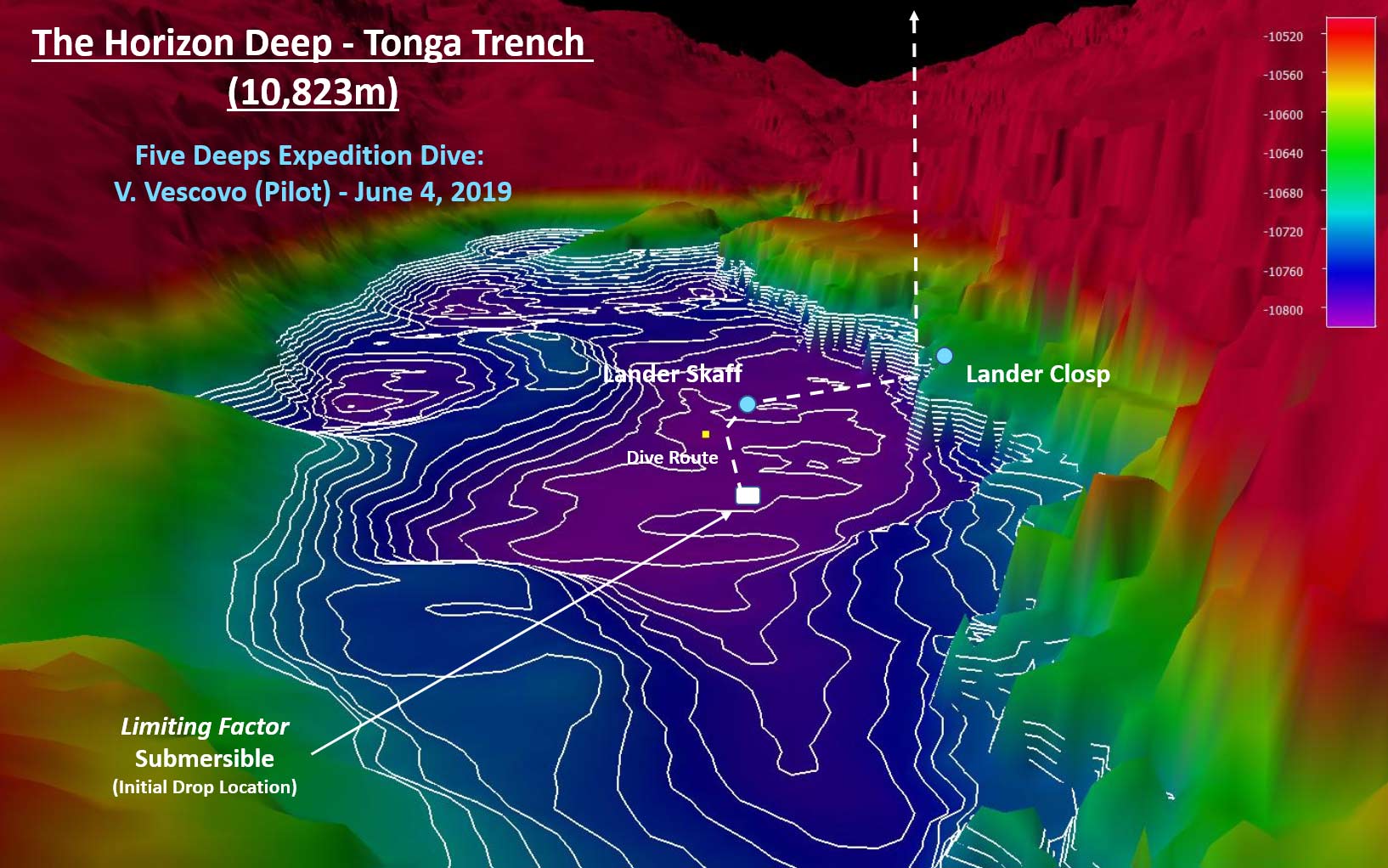 I managed the power situation by reducing electrical loads and re-directing some power flows, and made my way slowly towards Closp. After about 45 minutes, I saw my first sand-covered boulder and definitely noticed a rising seafloor. I still saw no life and even the rocks were heavily draped by thick sand and silt. It was all just a very beige undulating landscape with some outcroppings of yellow rock. It also started to get quite cold, now that the just-above-freezing water had chilled the titanium capsule of the sub. I put on sweater, hat, and gloves while I continued eastward. Eventually, I reached a low enough level of power that I couldn’t deploy my manipulator arm to try and grab a rock, and given I had already been down well over two hours, I decided to go up, given the situation. I was quite happy, however, as we were able to make the first manned descent of this very remote trench, and record what it looks like for the first time. Recovering rock samples will have to wait for another mission.

Upon reaching the surface four hours later, it turned out that a few fuses were blown due to the water-contamination in the single electrical junction box. We are not sure if we can repair it in time before the closing weather window, but we will try. It is a little frustrating to have an electro-mechanical issue delay another potential dive, but then, this is the sixth time we have successfully put the sub in over 10,000 meters of water pressure in a month, to which no other vessel of this type has ever been subjected. It still achieved its core mission, however, and we look forward to sharing what it looks like during the Discovery Channel series later this year.

We departed Tonga yesterday under beautiful skies and cool air. We have 43 souls onboard including three writers and one artist. People are becoming more interested in the Five Deeps project, and we are happy to have them with us to help tell the story of what we have put together and striven to achieve. We are only about a day away from the Horizon Deep, the deepest point in the Tonga Trench.

The ship made a series of detailed sonar runs before the submarine team boarded, and it was determined that the Horizon Deep is definitely not deeper than the Challenger Deep. Given how geologically active this area is – by some accounts the most active trench system in the Pacific – we thought there might be a chance that it was actually deeper. But no, alas, our latest readings indicate the Horizon Deep is 10,820 meters deep. That is 108 meters shallower than the deepest point in the Challenger Deep. They are very close to each other in ultimate depth – within 1% of each other, but the Challenger Deep still rules the deeps.

For now, we are checking out all the systems on the Limiting Factor and planning a potential two-dive series. The first dive, a solo dive by me, would be to the bottom of the Horizon Deep. It has never been visited before by a manned submersible, so that would be a first. On the second dive, I intend on bringing down scientist Heather Stewart of the Royal Geographic Society, to study a massive 2,000′ high underwater wall just east of the Horizon Deep. She is particularly keen to see what geological secrets it might reveal as we do a near-vertical ascent of a wall no one has ever seen. The weather is a bit “sporty” as mariners say, but we are forecasted to have 48 hours of pretty good weather in a day or two’s time. We hope to complete the first back-to-back (one per day for two consecutive days), 10,000-meter dives ever attempted by a sub. Based on the system’s great performance in the Mariana Trench, we believe this is very doable. 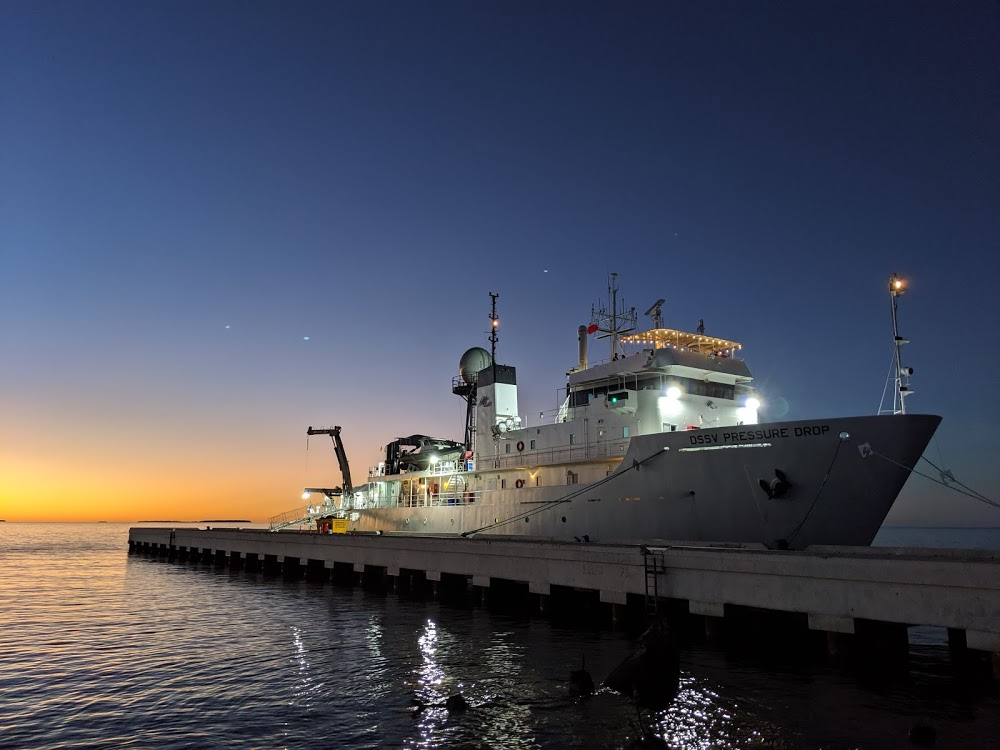 The Pressure Drop at its pier in Tonga, evening of June 1st. 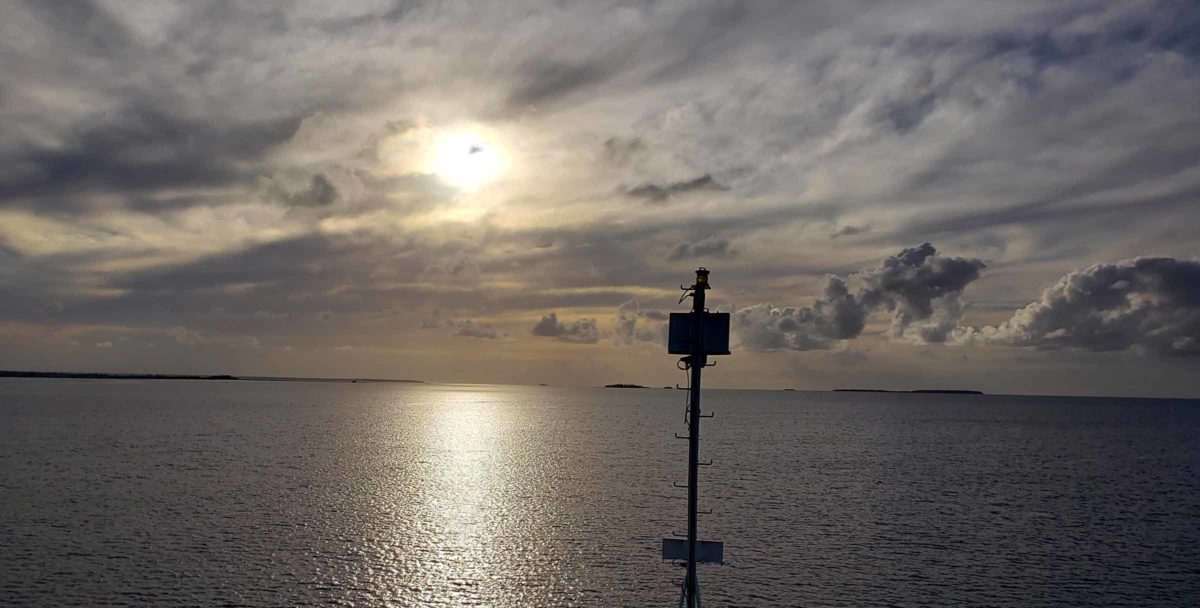