Live updates from the team aboard Pressure Drop during the mission to dive to the deepest point in the Indian Ocean.

Dili, With Some Understandable Anticipation

We arrived in delightful Dili, East Timor early this morning at sunrise and anchored just offshore. Customs & Immigration came out to visit and then took us to shore in their tug. The expedition team was able to catch a flight back to Bali while the Pressure Drop resumed its voyage to Guam. It’s always a bit of a strange and sad feeling to leave a ship after living on her for some time. The team is now flying off to the four corners of the world for a brief spell back to our respective homes. Most are returning in less than two weeks’ time to meet up again in Guam, to resume the expedition for the ultimate dive: The Challenger Deep. It has only been dived twice before, has not been visited in seven years, and has never been dived by the same person or vehicle twice. We hope to change that. 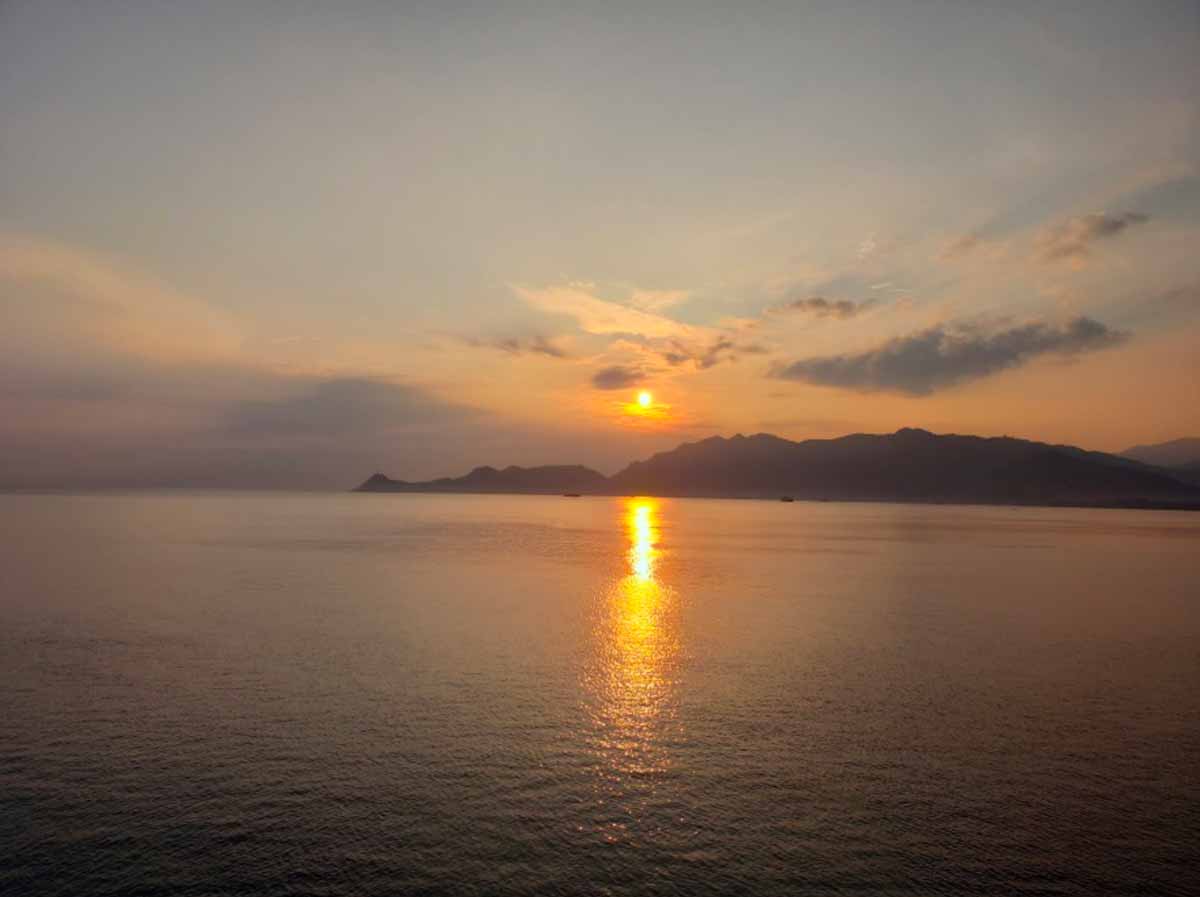 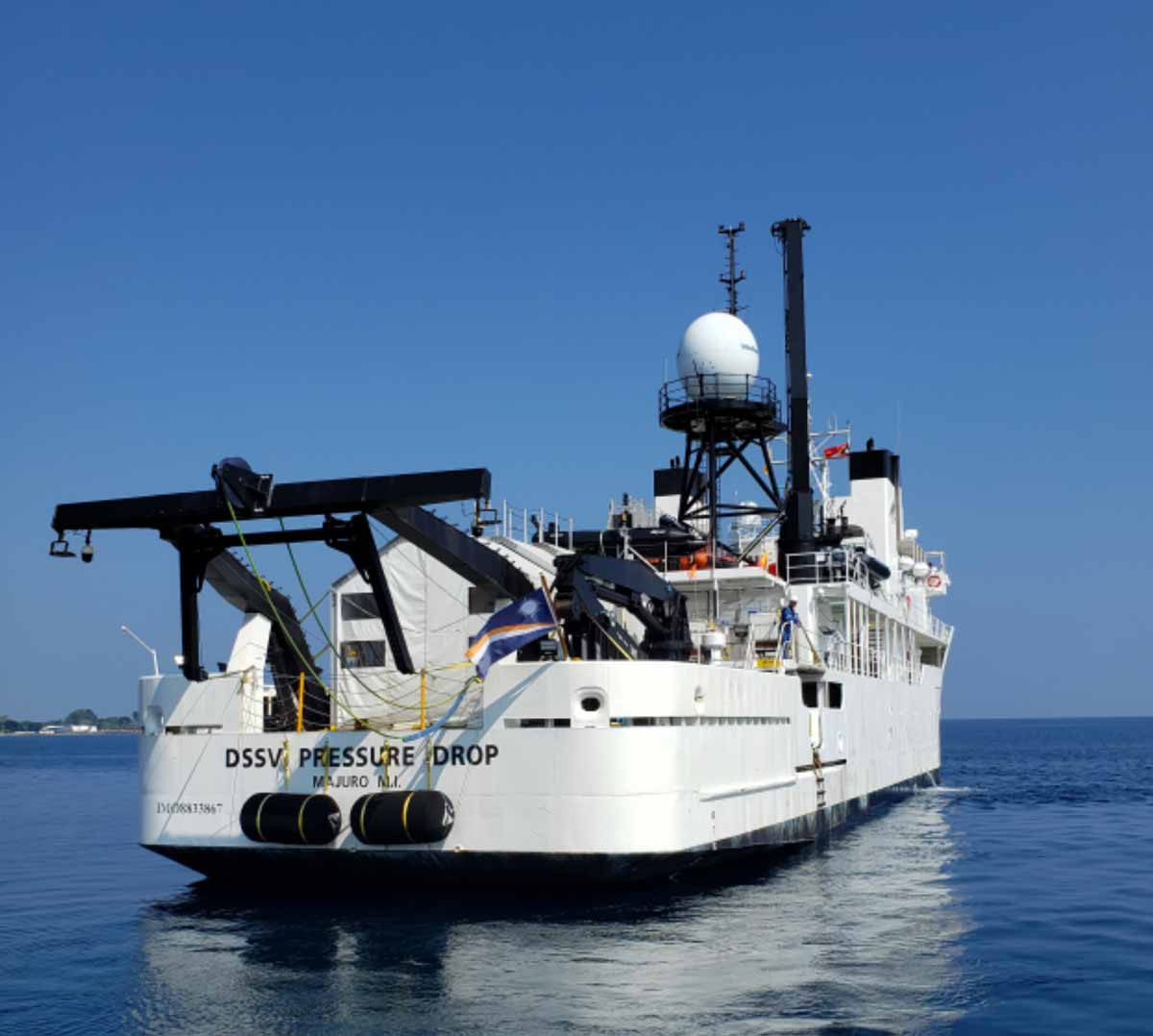 One of the great things about the Five Deeps Expedition is that, like mountain climbing, it allows you to go to places you might not have ever visited in your life. This morning we found ourselves in the Savu Sea of southern Indonesia, with ocean waters barely ripping before our passage. Everyone one onboard is busy packing and cleaning up in preparation for our departure tomorrow and the subsequent rapid transit from Dili to Guam while the expedition team gets a week or two break before the next big dives. The mood on the ship is exceptionally high, as we all remain very confident in the sub and sonar systems, the ship, our teams, and the ability to come back at the end of the month and assault the Challenger Deep in a way that has never been attempted before: with a state-of-the art EM124 sonar, three full ocean depth landers, and of course, the FOD Limiting Factor. We are getting ready to explore that extreme place like no one ever has before. 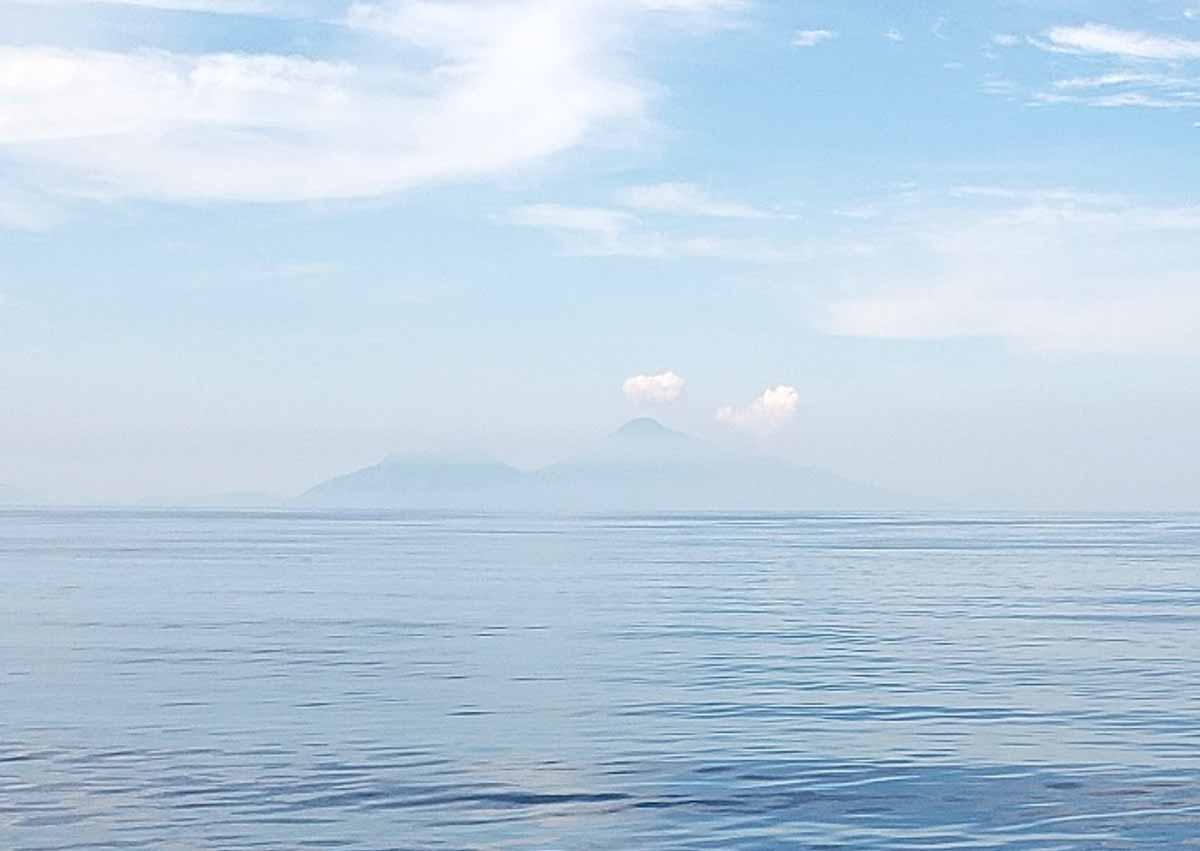 We continue to make good progress east to Dili, East Timor, our next port of call. The seas have become far more gentle now that we have put some distance between ourselves and cyclone Wallace. With the dives behind us and smooth sailing, our chefs favored us with an al fresco barbeque on the top deck with a beautiful view of the Indian Ocean. Mannfred, our wonderful head chef, even served us cocktails from a makeshift cocktail bar on our “Sky Bar” top deck, and afterwards Fraser, our First Officer, played live guitar with the backdrop of a perfect sunset. It was a great day to (almost) end this phase of the expedition. 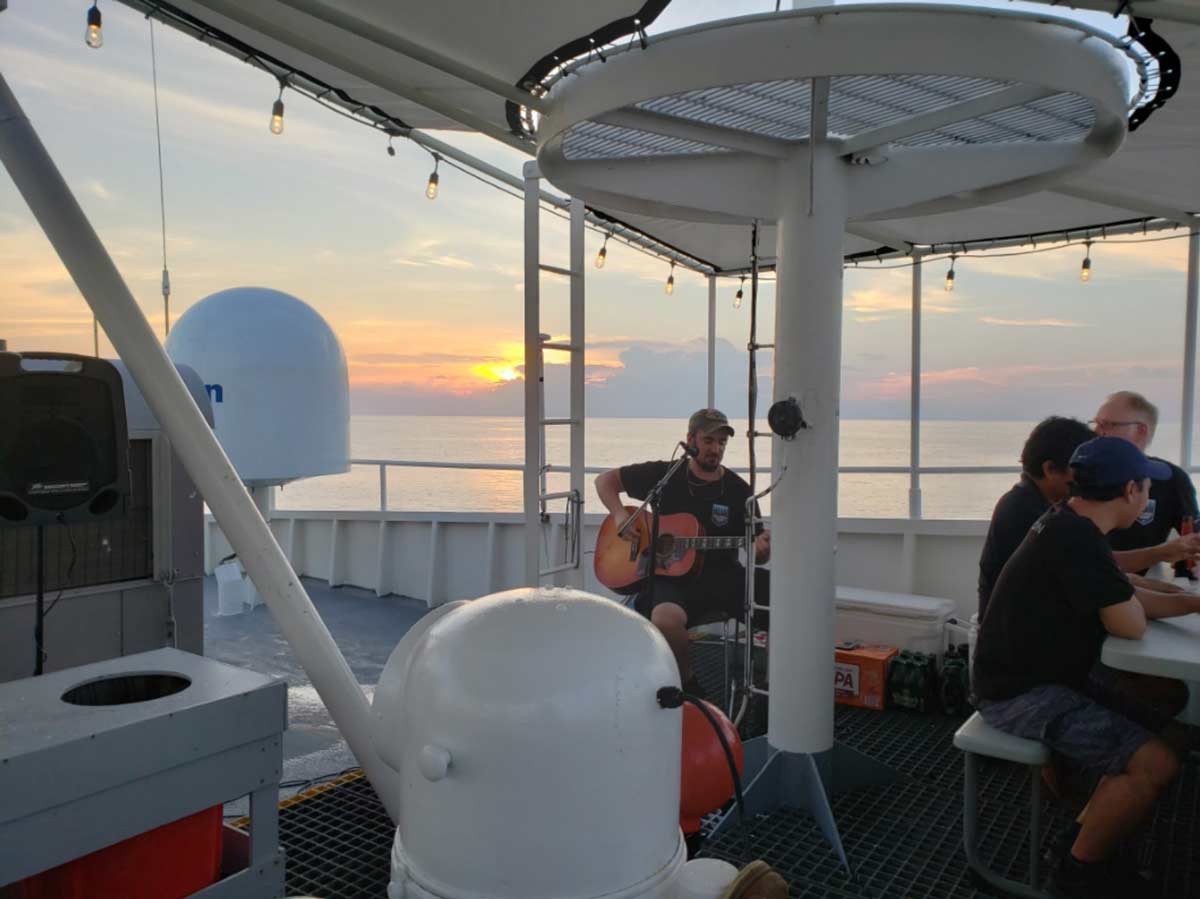 Today we are securing the sub and headed to our next port of call, Dili, East Timor. It is time to start thinking about the next big expedition: the Challenger Deep in the Marianas Trench off the coast of Guam. We are now headed in that general direction, while doing some continued detailed seafloor mapping on the way. The ship will stop in Dili to drop off the expedition team so we can get some rest before the next big dives. In the meantime, it wouldn’t be a Five Deeps Expedition dive series without having to dodge a hurricane, cyclone, or snowstorm, so we are currently skirting the top of this fine fellow, cyclone Wallace, which came up from the east and almost gave us a difficult time. It is headed away from us now, however, and we should be smooth sailing the next few days to port. 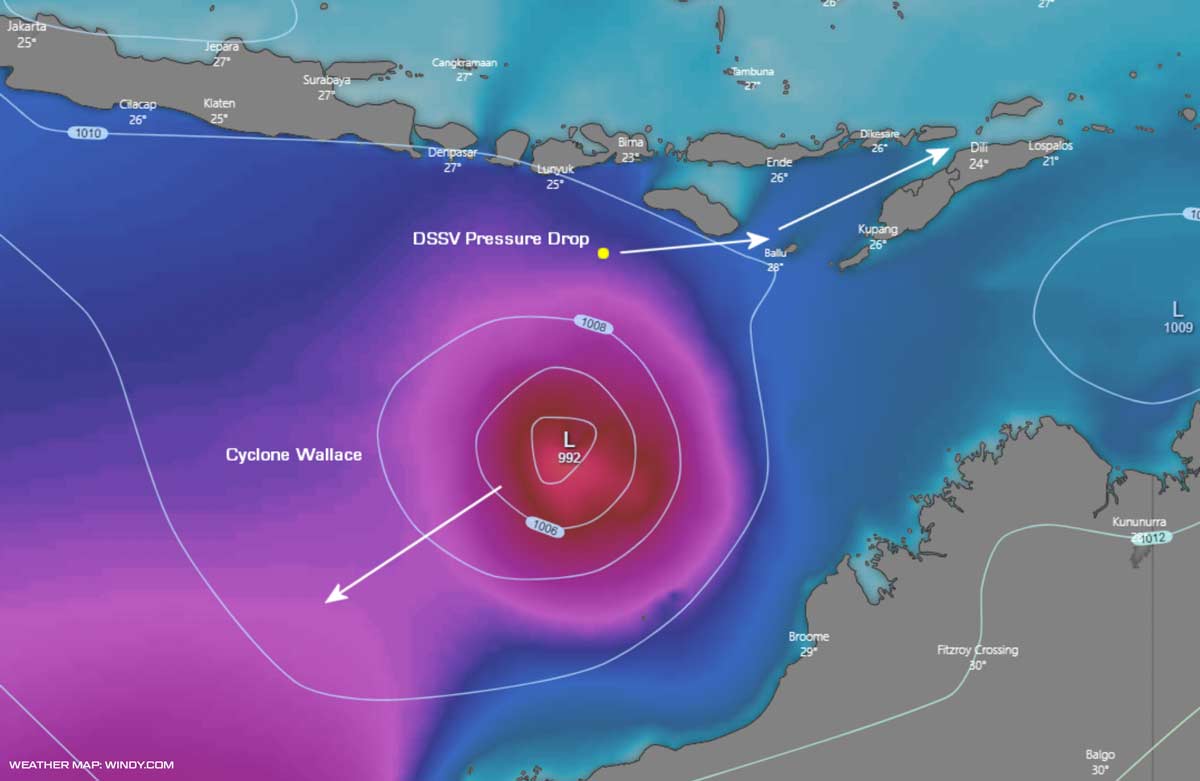 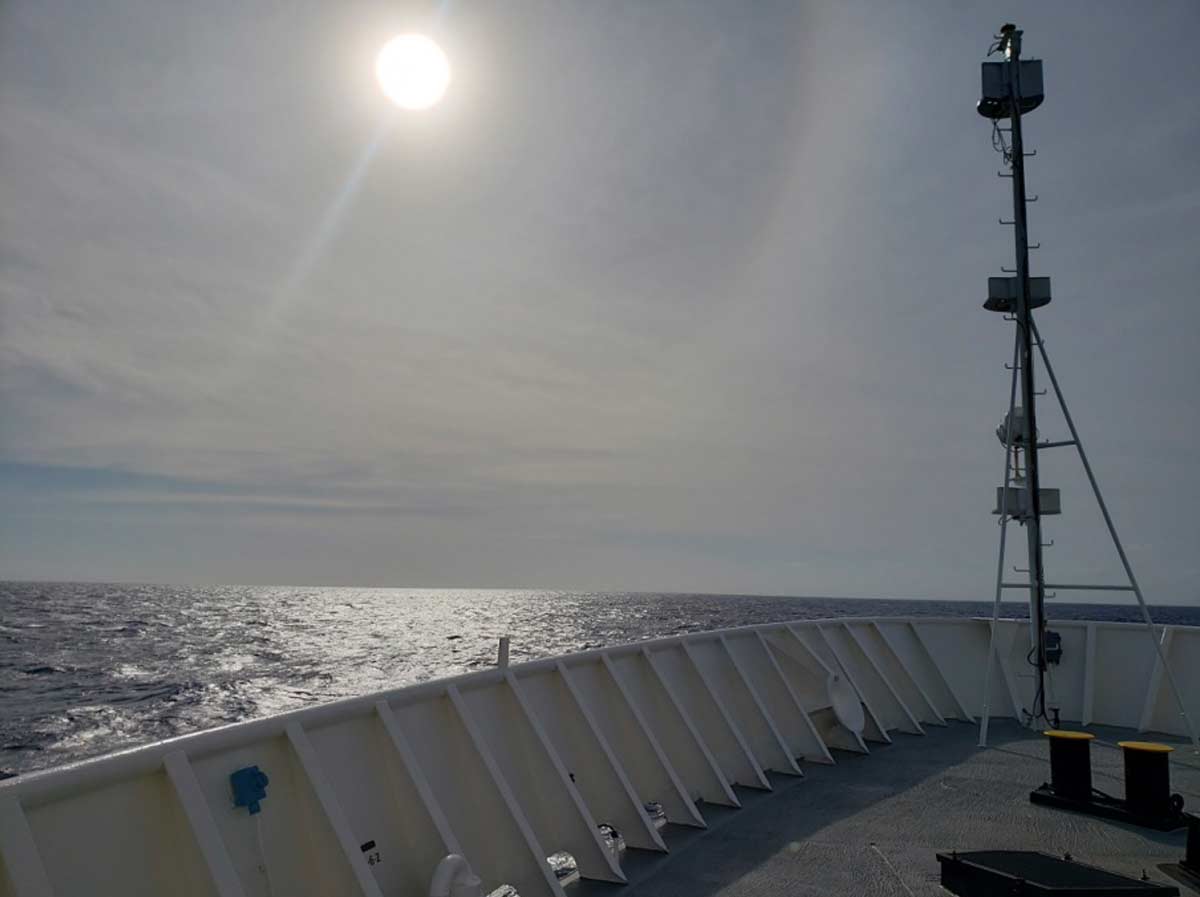 Today was a wonderful diving day. Patrick Lahey, the President of Triton Submarines that built the Limiting Factor, and Dr. Alan Jamieson, a Scotsman who is the Chief Scientist of the expedition, went down to not-quite the absolute bottom of the Java Trench. Their main mission was to find and “climb” a near-vertical wall under the sea close to, and just north of, the deepest point. They saw some amazing things underwater, particularly of geologic interest, but in the process Dr. Jamieson became the deepest diving British citizen in history with a recorded depth of 7,180 meters! It was also the deepest dive for Patrick in his long submarine career. The sub performed well and we are all confident it is ready for the deepest of them all, the Challenger Deep. 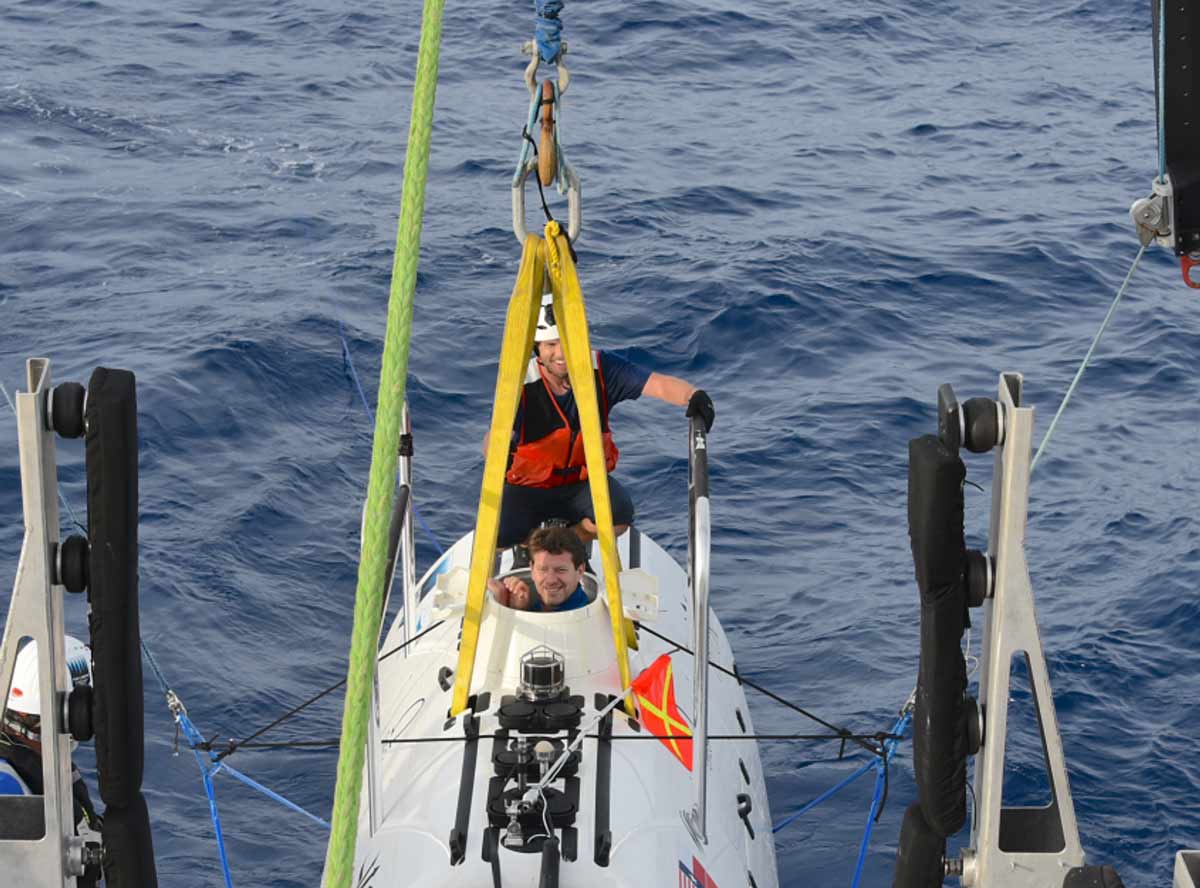 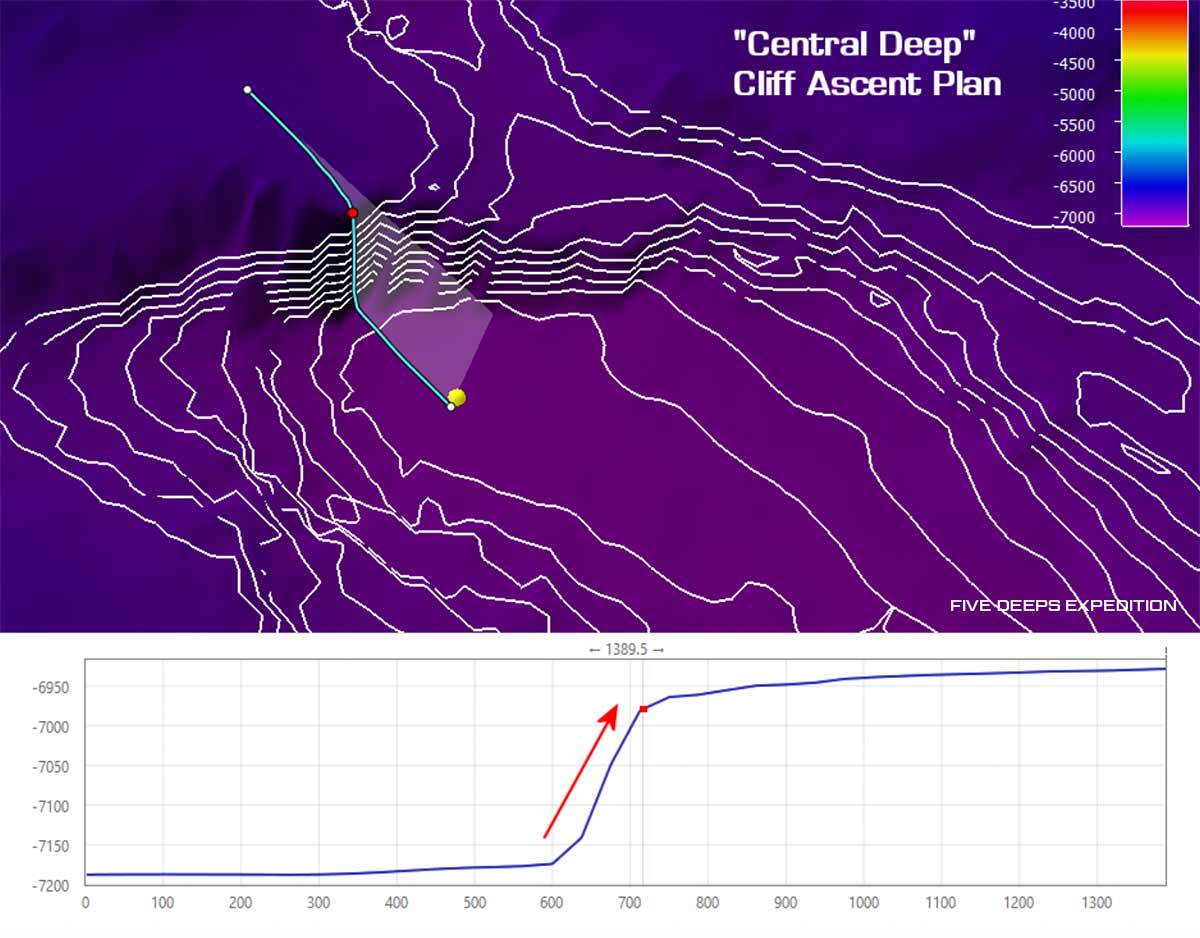 Today we took stock of everything that went right, and what didn’t go as expected on yesterday’s historic dive. We are hoping to have the sub ready for another dive tomorrow so that it can descend with Patrick Lahey, President of Triton Submarines and the sub’s principal builder as its pilot, and Dr. Alan Jamieson, the Chief Scientist of the expedition. Any dive below 6,000 meters, into the hadal zone, is not to be undertaken lightly and it essential to allow time for proper checking of the sub’s systems and prepare them for the next dive. Yesterday’s dive was only the 20th dive since the sub was built, so we maintain a constant vigilance over its condition and upkeep. We are still learning its secrets and idiosyncrasies. 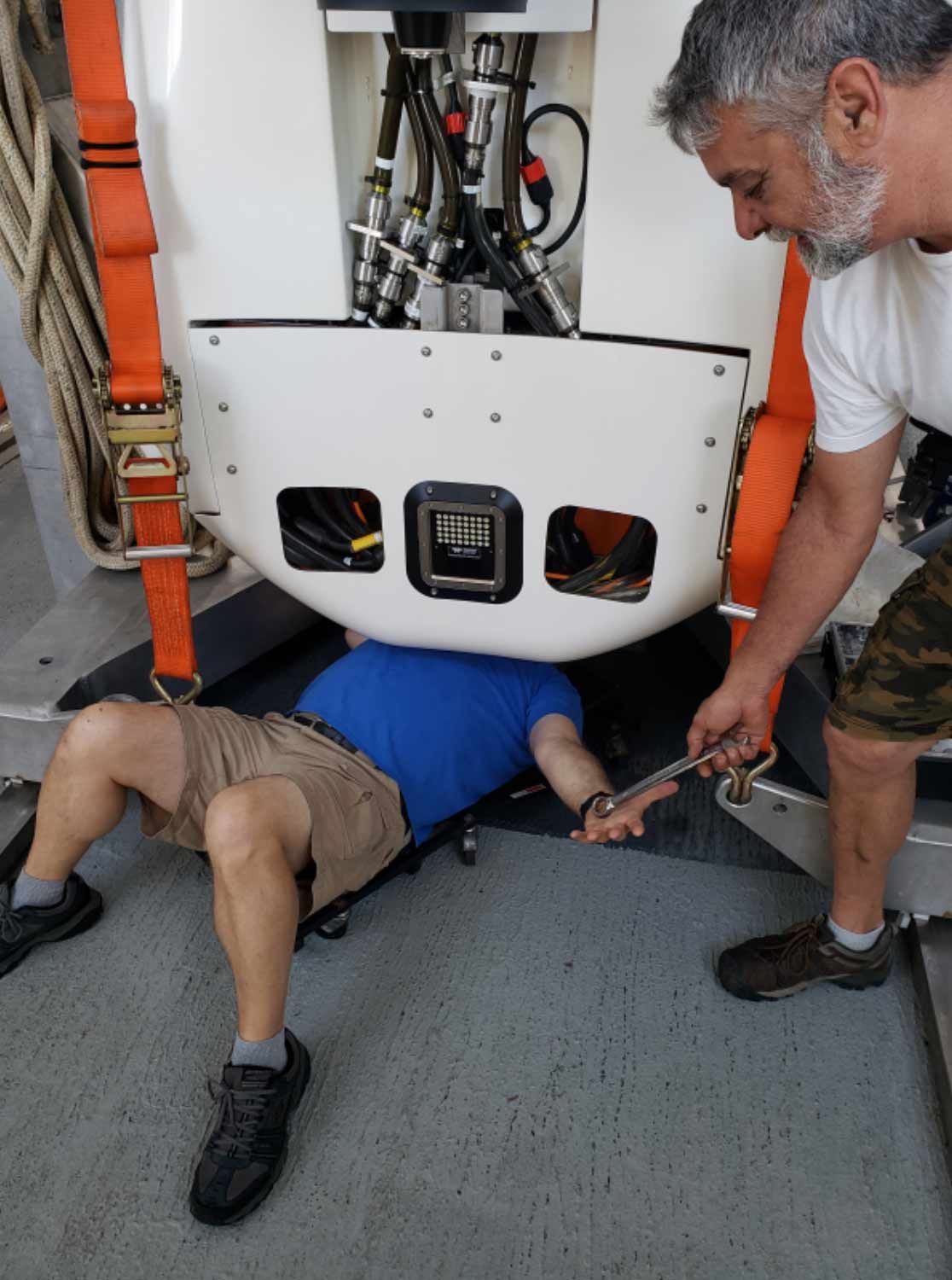 On a wonderful, calm day we were able to put the Limiting Factor in the water at about 9:30 am local time and made a successful dive to the bottom of the Indian Ocean 2.5 hours later. This solo dive reached 7,192 meters with just short of three hours on the bottom. The trip each way was about 2.5 hours so it was a long-ish, nearly 8-hour hour total dive. At the bottom, I was able to use the sub’ s own sonar ranging tool to locate and then navigate to lander Skaff at the bottom of the ocean and we each took some great photos of each other. The sub landed about 600 meters from Skaff, so we are all very happy that we demonstrated the ability to home in on something the size of a dinner table at the bottom of the ocean from quite a distance. 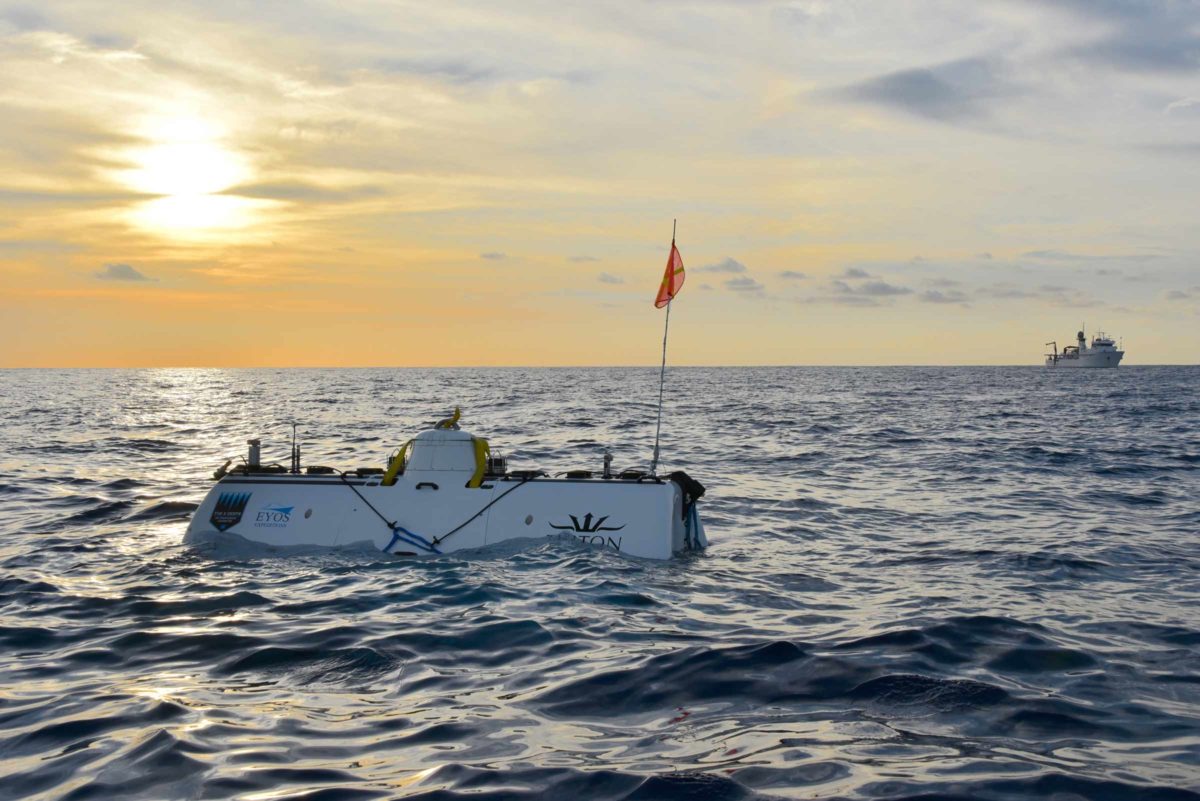 After multiple passes over the western portion of the Java Trench, we’ve concluded that it’s a very close call, but that the “central deep” is indeed deeper. The Western Deep, as we are calling it for now, is 7,175m deep with a possible measurement error of +/- 5-21 meters. The Central Deep is 7,185-7,188 meters with possible measurement error of 1.5 – 10 meters. Based on the probability curves associated with these average depth values and error terms, we think with 90-95% certainty that the central deep is, indeed, deeper. Therefore we turned the ship around and are headed back to the central deep to potentially dive it tomorrow.

Below: A clip from our Chief Sonar Operator’s notebook, Cassie Bongiovanni, showing the calculated depths of the “western” and “central” deeps of the Java Trench. The star indicates her assessment that the “Central” deep is indeed the deepest point 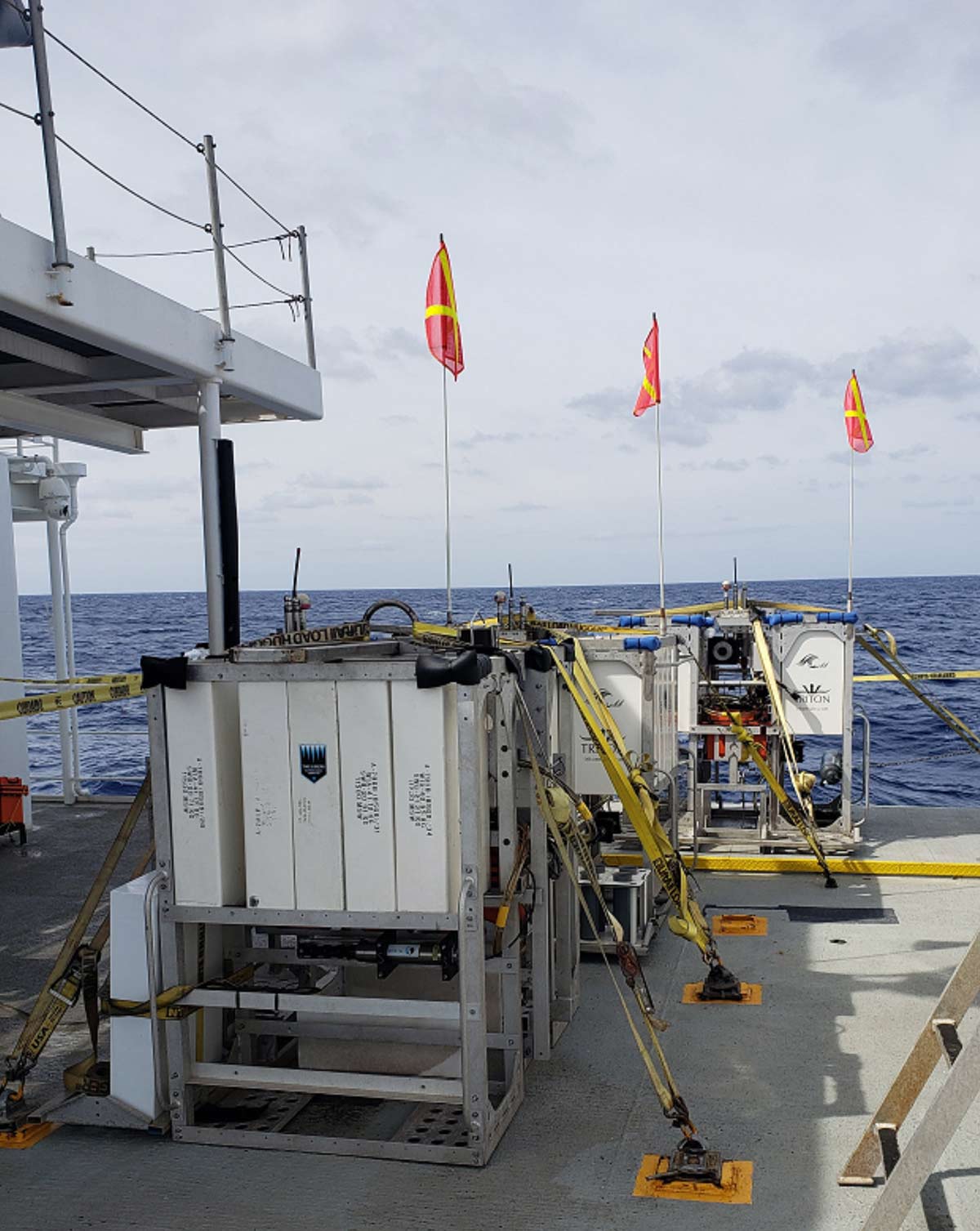 Out to Western Deep

Today was a busy maintenance and enhancement day for the submarine as we headed off to confirm the depth of the “western” area of the Java Trench. The team only made one “pass” with the sonar last time it was there, and we need a few more passes to confirm its depth. In the meantime, calm seas are allowing for steady work to get the ship and sub ready for another deep dive attempt. If it turns out the western “deep” is deeper, than we’ll just stay there and dive it instead. 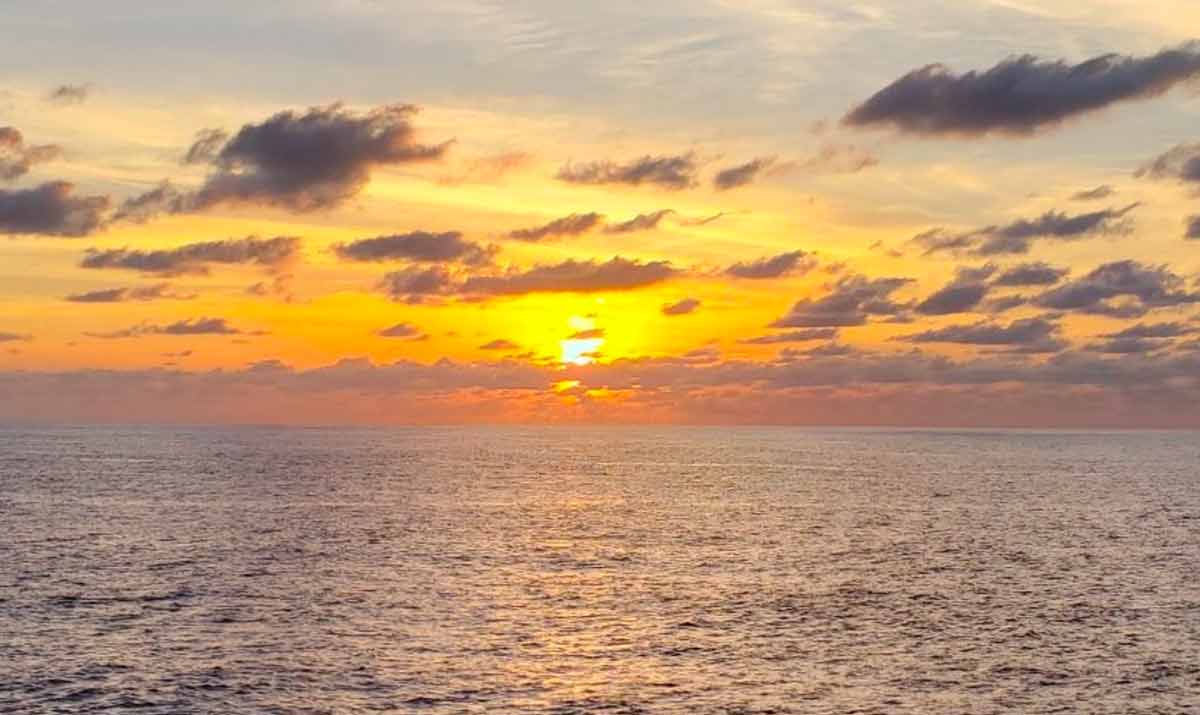 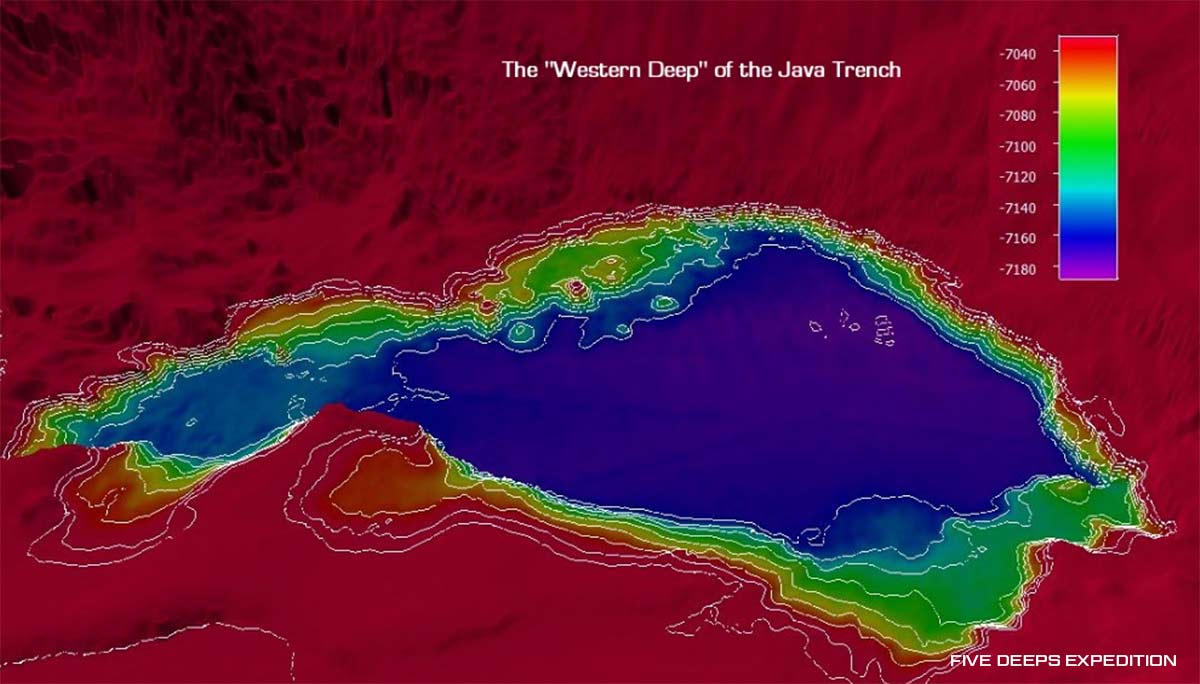 Today we tried to dive what we believe to be the deepest point in the Java Trench, due south of Bali in the “Central Deep” area. The submarine checked out perfectly but after a few hundred meters in the water, one set of my weights dropped uncommanded and we calculated that I would not be able to make it all the way down with the remaining weight on board. Later, we traced the fault to an imperfectly-manufactured weight that caused our weight-release system to release prematurely (when it “fails,” it lets go of its load as it should!). It was frustrating, but we were able to verify that certain new communication systems like texting were working well and we just had to put our heads down, diagnose the weight system’s failure mode, and improve it for next time.

We were a bit rushed to do the dive, so we decided to head out to the western “deep” of the Java Trench to scan it a few more times and make sure that it is not deeper than the “central deep.” We have imperfect data on the one out west, so it will take two days to go there, map it, and come back to the central one but that will give the Triton team plenty of time to prepare the sub for another try. 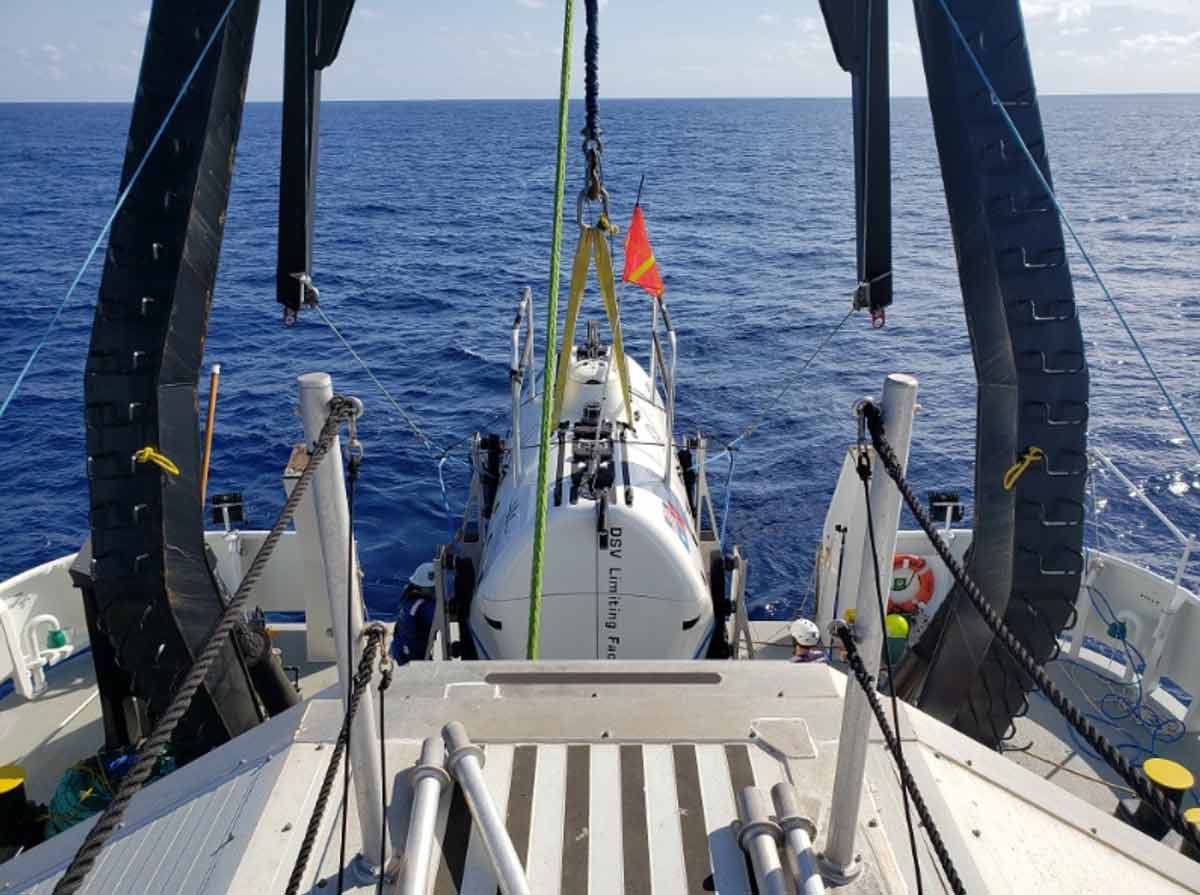 We just headed out from Denpasar, Bali for the central part of the Java Trench. Before we arrived, the DSSV Pressure Drop cruised the length of the trench to identify its likeliest deepest points – something that had never comprehensively been done before with a sonar of this capability. Our massive, ship-mounted EM124 sonar is telling us that it is a close call, but it appears there are three likely deepest points: one off to the far west, one in the center due south of Bali, and one off to the east. However, it appears that the one in the center is the deepest, so we will head there first.

We also just got word that the Indonesian government, completely by surprise and for no apparent reason, denied our request to do a scientific dive with them and their researchers. The law is a bit vague about what we can do in their Economic Exclusion Zone (EEZ), since we are not going to be doing anything “economic” like fishing or looking for oil. We are heading out anyway, so we can at least dive in the water, test our systems, cameras, underwater navigation gear, and basically conduct more sea trials while also trying to dive to the bottom of the Indian Ocean. No harm in that, surely. 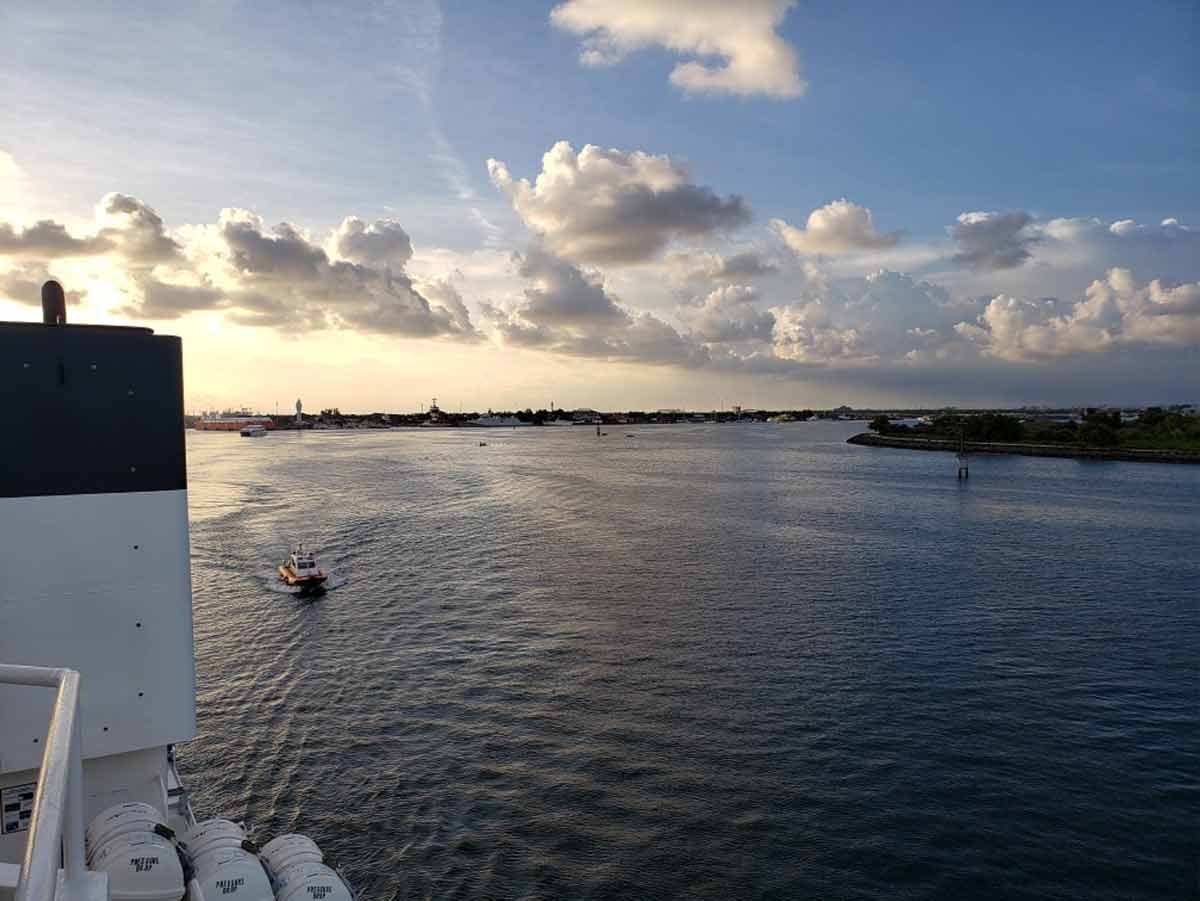 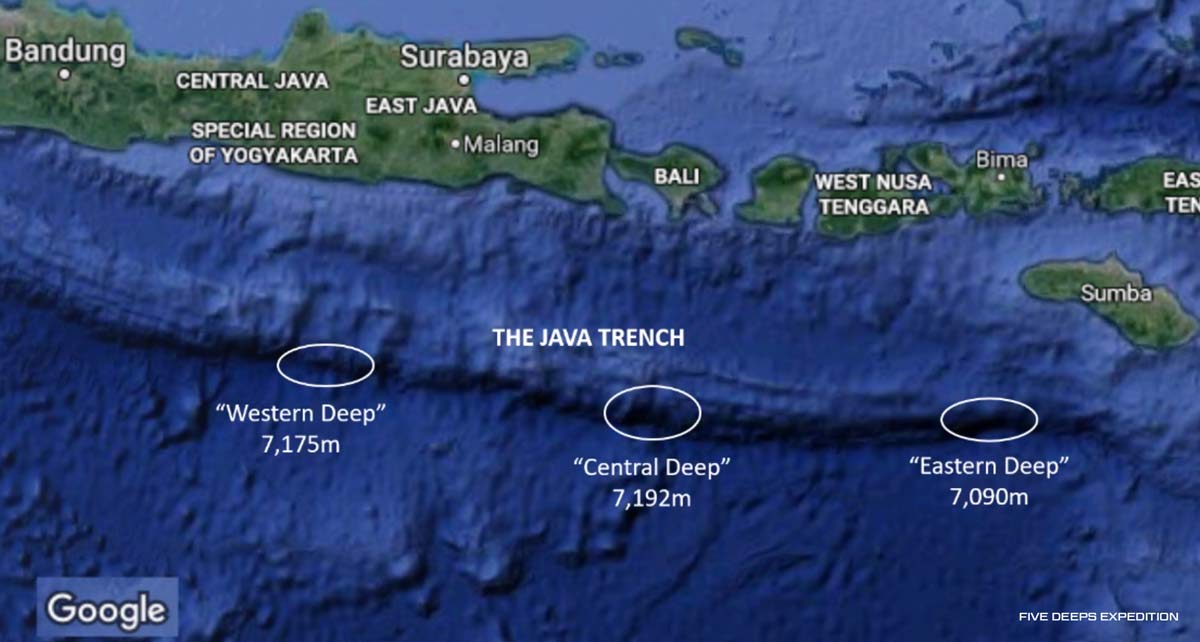